On behalf of my colleagues, I filed a Notice of Motion regarding a restart to negotiations on Calgary's new "event centre". Thank you to my colleagues who have added their names in support. I believe that the onus is on us to restart the conversation.

This motion will be debated at the May 28th, 2018 meeting of Council.

WHEREAS in the Fall of 2015 City Council undertook a process to assess the feasibility of a new event centre/arena facility for Calgary;

AND WHEREAS City Council, City Administration and the Calgary Municipal Land Corporation (“CMLC”) have spent considerable time, effort and resources examining various scenarios to consider a Sport and Entertainment Facility (the “Event Centre”);

AND WHEREAS an Event Centre has been examined as a viable key anchor in the redevelopment of West Village via the Calgary Sport and Entertainment Corporation’s (“CSEC”) proposal for CalgaryNEXT; as well as through the City’s preferred option (April, 2017) as part of the Council approved Victoria Park Master Plan led by CMLC;

AND WHEREAS it continues to be important for Calgary to work toward potentially realizing an Event Centre as an anchor in Victoria Park;

NOW THEREFORE BE IT RESOLVED THAT Council reaffirm its commitment to the exploration of an Event Centre that takes into account the best interest of all Calgarians;

AND FURTHER BE IT RESOLVED that Council nominate three (3) Councillors to serve as members of the Event Centre Exploration Committee (“ECEC”) at the 28th of May, 2018 meeting of Council;

AND FURTHER BE IT RESOLVED that the initial membership of the ECEC shall also include:

AND FURTHER BE IT RESOLVED that the initial membership of the ECEC include the following Committee Advisors to serve as a sub-panel:

AND FURTHER BE IT RESOLVED that the initial ECEC develop Terms of Reference (the “Terms”), which shall include but are not limited to pursuing new and various options for a funding framework;

AND FURTHER BE IT RESOLVED that the ECEC report back to City Council no later than June 30, 2018 for review and final approval of the ECEC Terms prior to commencing their exploratory work. 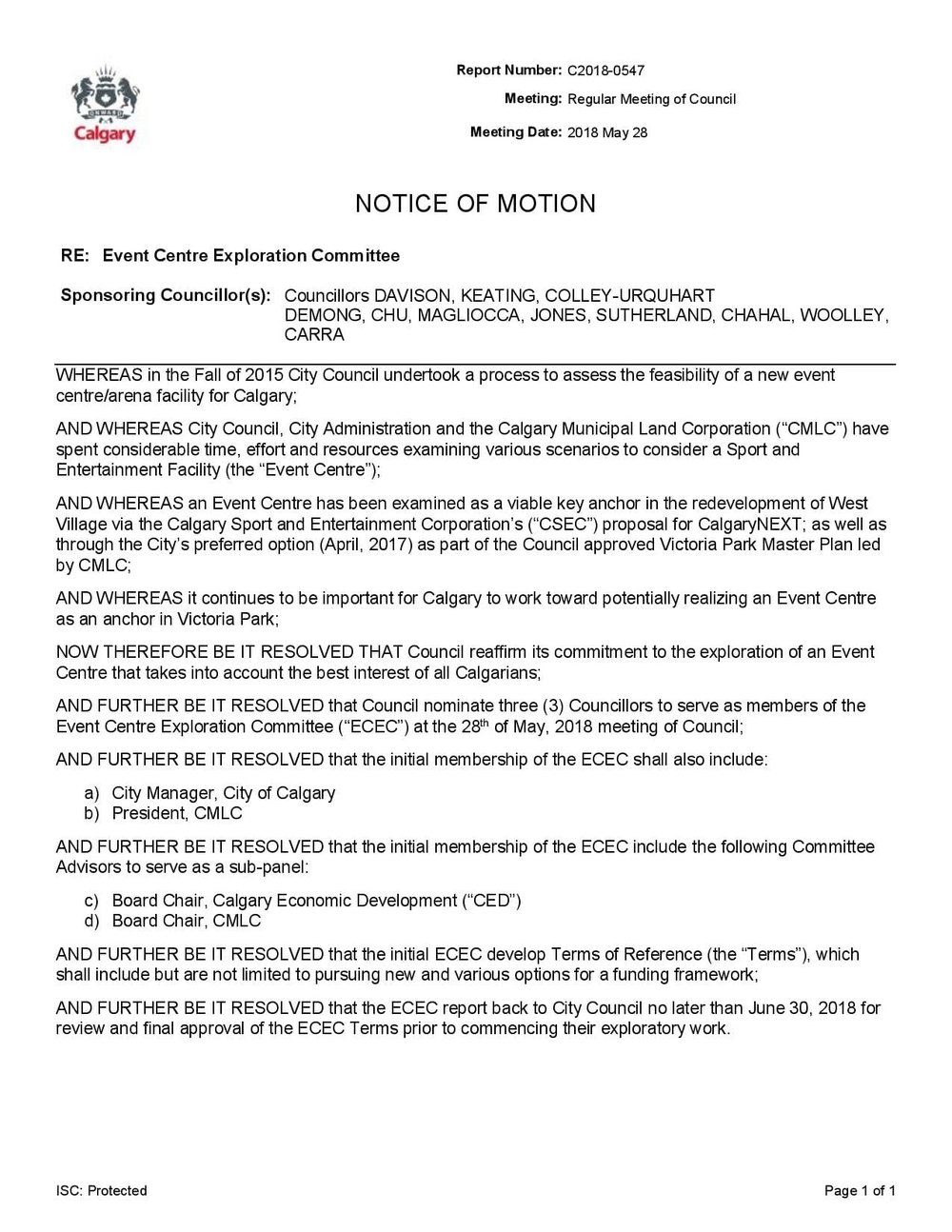 We Can. We Will: Make Downtown THE Place to Live, Work and Play

Signup to be the first to get the latest news and updates from the campaign.